It is a day for celebrating all the super sized giants. These marvels have made a benchmark for the generations to come. Therefore, we bring to a list of the tallest skyscrapers in the world that are magnificent and have challenged every bit of engineering.

And just in case you have vertigo, you might not even want to take a look at the tallest glass skyscrapers. But experiencing them once in a lifetime is pretty much required.

Tallest Skyscrapers In The World

Dubai is known for it's rich looking and ostentatiously erected skyscrapers. Burj Khalifa is an epitome of luxury and all things classy. In fact, Burj Khalifa is the only one in Dubai that steals away all the limelight. 163 floors, seven-acre parkland, 30,000 residences, 9 hotels, 30-acre man-made lake and a shopping mall, is what makes the entire building spectacular.

Being in the heart of Shanghai, Shanghai Tower stands tall displaying eight years of sheer hard work. This too is amongst the tallest skyscrapers in the world. Nine cylindrical building are being stacked on top of each other (128 floors) along with 320 hotel rooms, restaurants, and garden. It boasts of having the fastest elevator covering the tower at the speed of 18 meters per second. That's pretty nauseating. This structure took around 13 years to complete. The tower is a home to private offices, shops, movie theatre, theme park and 7-star luxury hotel. Lotte World Tower is a 123-floor skyscraper with only top 10 floors being available for public use. Quite impressive, isn't it? 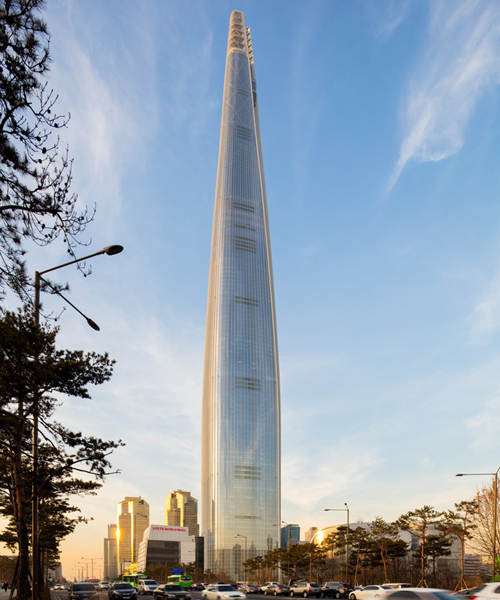 This building is one of the striking engineering marvels. It is also one of the tallest glass skyscrapers. One World Trade Centre is also known as the freedom tower, and it sports 104 floors. The structure is designed to reflect the US independence period. It's a significant building in the US with a breathtaking view of Manhattan.

This is one of the tallest skyscrapers in the world with a mix of tradition and technology. Taipei 101 has 101 floors with distinctive blue-green glass walls and a concept that incorporates Feng Shui philosophy along with symbolizing liberty and renewal of time. Not only that, but Taipei 101 has also been awarded as the largest and tallest green building in the world.

ICC is a 108 story building along with being an iconic structure in Hong Kong. This isn't only the tallest glass skyscraper but is also a home to the world’s highest swimming pool. However, the skyscraper has risen above an acceptable level, so the height had to be scaled down a bit. Though it still has an observatory, 5-star restaurant, shopping mall, commercial offices and Ritz Carlton hotel, it also carries out the largest sound and light show twice every night.

This is the first skyscrapers ever built (1885). It was not just a proud moment for Chicago but the entire world. The construction was the first to make use of structural steel for supporting the interior as well as the exterior. Originally there were only ten floors, but later two more floors were added in the year 1890.

Liked what you just read? Want to read more such informational and interesting stuff? Let us know through the comment section below. We would love to hear from you!