Whether the earth revolves around the sun, or the vice-versa, it was a huge topic for debate. You can even say that it was one of the highly debated topics in the field of astronomy. In the past, there were many irrelevant and illogical theories given by astrologers and philosophers. Thanks to the discovery that the earth revolves around the sun, or else we would still have been discussing the same.

But, the astronomers never fail to amaze us with their mind boggling questions. After the “what revolves around what, came “why does the sun change its position?”

Why Does Sun Change Its Position In The Sky?

Why Does The Sunset And Sunrise Position Change?

The sunrise and sunset position is different every day, but why is it so? There's a simple phenomenon behind this, the earth revolves around the sun in its orbit, and the change is due to the inclination of the earth's rotation axis. The maximum angular distance, which varies with latitude, is the actual distance between two sunrises and sunsets.

How Does Latitude Effect Sunrise and Sunset?

The maximum angular distance (the angle between two solstices), which is the actual difference in distance between two sunrises and two sunsets, changes with a change in the latitude. It is minimum at the equator and maximum at the poles.

Why Does Sun's Path Changes Throughout The Year?

While the earth is following its elliptical orbit, it's also revolving around the sun and this rotation of the earth on its axis causes different surfaces of the earth to face the sun at a different angle. The rotation gives rise to another effect which makes the Sun's apparent path different every day. Thus, the sun is at a different point on its orbit every morning. 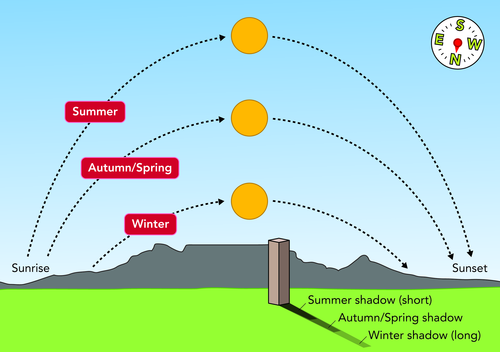 The Universe is a huge mystery, and if God remains by our side, we will unfold each mystery one by one. Let us know if you liked the article, or if you have any other mystery occupying your mind using the comment section.