What is Buddhist Education? How does it Impact the Students?

Buddhists have many methods to impart their education. If you want to learn more about this ancient education and what impact it makes on its students, keep on reading further.

Buddhism is based on the teachings of Gautama Buddha. He was born as a royal in the Kapilvastu family in the 6th Century. Buddha believed in the Law of Karma. The law of Karma states that “a person gets what they deserve on the basis of their past deeds.” The existence of man is the result of their past deeds. In Buddhism, the place of God is taken by Karma as it is “the one” who governs the universe. Buddha’s philosophy is described as ‘Tripitakas’. Vinayapitaka – Rules of conduct, Suttapitaka – Buddha’s Sermon, and Abhidhammapitaka – Exposition of philosophical theories.

#1. The main aim of Buddhist education is to spread the teachings and the knowledge of Gautama Buddha. Along, with this, Buddhism aims for the attainment of Nirvana. Nirvana is a state of in which there is neither suffering, desires, nor sense of self, as the person is released from the effects of karma and the cycle of death and rebirth. Nirvana is the final goal of Buddhism.

#2. Education is imparted equally to all. Caste, religion, gender, etc. are ignored, and all the students are treated equally. The Buddhist education is open to all, and everyone gets an equal opportunity for growth and self-development.

#4. Bhikshus or Monks are the teachers of Buddhist education. The role of a teacher is highly important because they are responsible for teaching their students the path to righteousness and nobleness. The monks should have the purity of character, and thoughts. 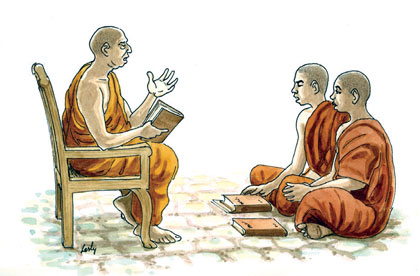 Methods Of Teachings In Buddhist Education

The many teachings of Buddha have impacted the lives of the followers. If they want to travel down the path of righteousness, then they have to be noble. Buddhism guides them and helps them in their journey. The implications of Buddhism include directions for developing a good code of conduct. Also, the focus on Karma helps people to keep a check on their conduct in life. Buddhism gave way to a new form of education that involved living a noble life, and it created the foundations of the modern education system.

Liked what you just read? Let us know in the comments section below.

Is Buddhist Education Better for a Child's Overall Personal Development?

Show result before you give your opinion
161 Votes